A recent investigation by the Physicians Committee for Responsible Medicine exposed experiments at Elon Musk’s company Neuralink, that attempted to develop a brain computer interface (BCI) using invasive experiments on animals. In 600 pages of documents retrieved from Freedom of Information requests, PCRM exposed the intense suffering of monkeys in this sloppy research.

Following the investigation, Neuralink admitted four out of six monkeys had to be euthanized due to post-surgical infections, which, according to the documents, resulted in months of suffering. 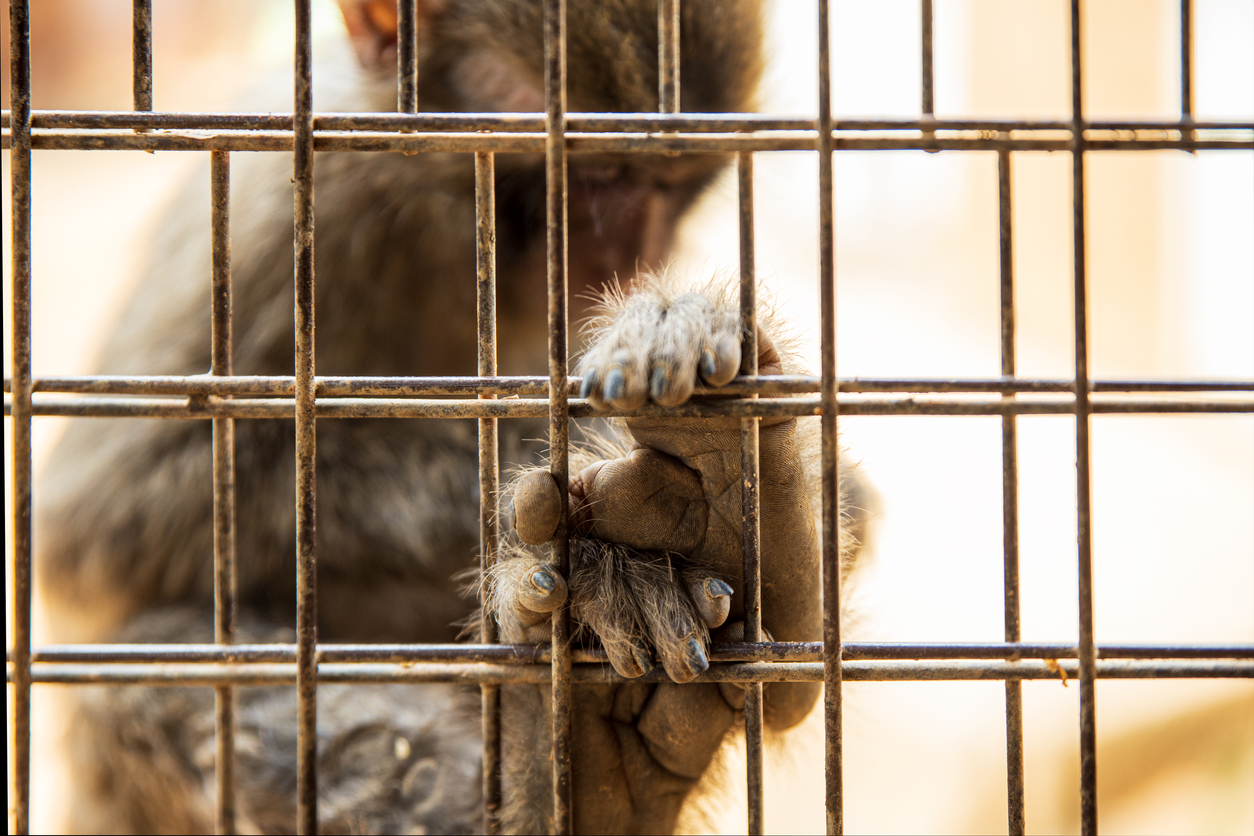 In an opinion article published in the New York Daily News and reprinted below, CAARE’s president Barbara Stagno, calls out these invasive and cruel experiments as backwards and unnecessary, pointing to more than a decade of extensive research to develop BCI’s using human volunteers.

Please join CAARE in demanding that Neuralink end these despicable experiments on monkeys and other animals.

The recent investigation by the Physicians Committee for Responsible Medicine into brain experiments on monkeys at Elon Musk’s Neuralink exposes an ugly world of invasive research on animals that is unfortunately widespread.

People were shocked — and they should be — to learn that monkeys were made to suffer by having portions of their skulls removed to implant recording devices and headposts to keep them restrained for many hours.

What they don’t know is that similar experiments are happening at labs across the nation, including here in New York City. In a laboratory at Rockefeller University, two monkeys, referred to as M1 and M2, spend their lives having their brains mapped to facilitate advances in facial recognition. These sentient individuals are effectively turned into recording devices; they have undergone multiple brain surgeries to insert cranial implants and an attached headpost, followed by surgeries to implant electrodes for studies.

M1 and M2 demonstrate their extreme intelligence by detecting normal from distorted faces, while they are confined in body restraints and motivated to comply for a small “reward” of juice, while electrodes record their brain activity.

The researchers claim their work may help human patients with neurological disorders, while Elon Musk claims the Neuralink experiments are needed to develop a brain-computer interface to help paralyzed people.

How disappointing that this entrepreneur, known for his cutting-edge work on space travel, electric cars, solar energy and other innovations, does not seem aware that exciting work in this field is already being carried out successfully with human patients.

Brain-computer interfaces (BCI) are not new and are being developed based on ethical human research. Scientists at the University of Pittsburgh Brain Institute are working to develop BCIs, including one that helped a paralyzed man experience touch through a robotic arm that he controls with his brain.

This breakthrough was built on years of work at Pitt which previously enabled a quadriplegic woman to feed herself chocolate using a mind-controlled robotic arm, and a man paralyzed in a motorcycle accident to touch his girlfriend’s hand.

At Ohio State University’s Wexner Medical Center, researchers are working with Batelle’s NeuroLife technology to enable a paralyzed man to move his real arm — not a robotic one — and feel what he is touching.

These innovations are not limited to movement and sensation. In 2016, a woman in the Netherlands, paralyzed by ALS, was able to speak using a computer following surgery to implant a BCI, the result of years of research by the UMC Utrecht Brain Center.

Like Neuralink, the research at Rockefeller University does not require invasive brain studies with monkeys to study what we can learn from ethical human research. Working with four human volunteers, researchers at Carnegie Mellon University used an advanced brain imaging tool called magnetoencephalography to determine how the brain rapidly distinguishes faces.

In a blog post defending their research, Neuralink admitted that several monkeys died as a result of these experiments. Two, which they claim were used in prior research, were scheduled for “terminal procedures,” which euphemistically means that they were used up after a life as experimental subjects.

While Neuralink uses carefully crafted wording to conceal the real story, it’s obvious that these monkeys experienced practices that would never be tolerated as part of a human study. Neuralink admits four out of six monkeys had to be euthanized due to post-surgical infections, which, according to PCRM’s investigation, resulted in months of suffering.

Try to imagine a hospital with that kind of track record. They would be shut down in no time.

This is why we must work to end animal experiments in favor of ethical human research. The guidelines and standards for human clinical research inevitably answer to a higher standard than animal research will ever be held.

Animals can never give informed consent. Which is why human volunteers don’t have headposts implanted into their skulls to subject them to restraint because they are willing participants, serving in a study that is likely to benefit themselves and fellow human patients.

Two laws are currently pending in Congress that have great potential to change the current paradigm of animals as default research tools. The FDA Modernization Act would eliminate an archaic requirement mandating animal testing. And The Humane Research and Testing Act would establish a dedicated center within the National Institutes of Health to promote research with non-animal, human-relevant methods. These bills deserve our support.

We have a wealth of modern tools that allow scientists to delve into human medicine without the cruel enterprise of animal research. This must be our future. And theirs.

Stagno is president and executive director of Citizens for Alternatives to Animal Research and Experimentation and deputy director of humane science at Center for a Humane Economy.